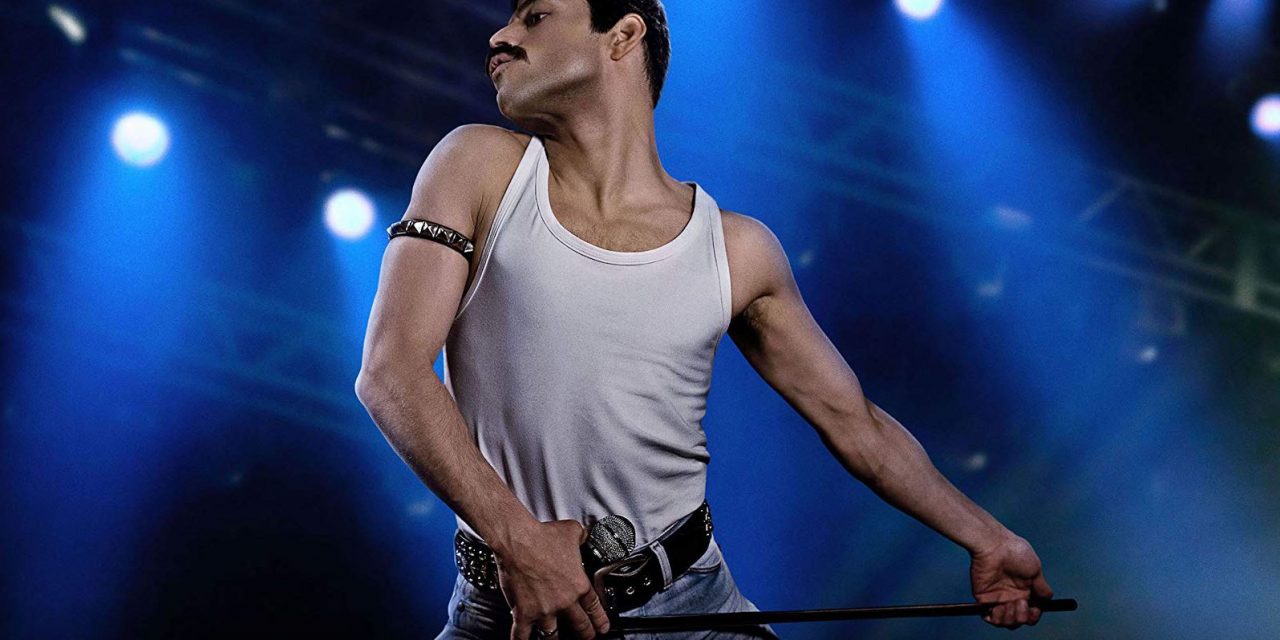 I love Queen, and I love Freddie Mercury. I always have, and I always will, so when I heard a few years ago that Brian May and Roger Taylor were planning a biopic charting Queen’s rise to fame and Freddie’s story I was ecstatic with happiness. I have covered what Queen and Freddie Mercury means to me in this post, and how I grew up with them and the wonderful memories I have of them, so here I will concentrate solely on what I think of the film.

“Bohemian Rhapsody” has been over ten years in the making and plagued with problems. For a start, Sacha Baron Cohen was originally given the role of Freddie Mercury, then Ben Wishaw, and finally it went to a relatively unknown actor called Rami Malek. But how on earth can someone, anyone, play the part of a man who was so unique? I did wonder if anyone could pull off playing one of the most iconic rock stars of our time, if not the most iconic rock star, and how anyone could play Brian May, Roger Taylor and John Deacon realistically. On that, I was proved very wrong.

Rami Malek IS Freddie Mercury. Sure, he doesn’t look EXACTLY like him and in a way that is a good thing because Freddie was so unique. Throughout the film though it is easy to suspend belief and really, really believe he is Freddie, especially during the Live Aid re-enactment sequence at the end, and I think that Rami Malek should get an Oscar for his performance as Freddie Mercury. I was also very impressed at how Brian May, John Deacon and Roger Taylor were portrayed in the film played by Gwilym Lee, Joseph Mazzello and Ben Hardy respectively. Their looks and mannerisms were almost spot on!

Is This The Real Life, Is This Just Fantasy

The film opens with Freddie walking out onto the stage on that fateful day for Queen – 13 July 1985 – to give his performance of a lifetime for “Live Aid”. It then goes back in time to London 1970 when Freddie Mercury, or as he was known then by his real name Farrokh Bulsara, was working as a baggage handler at Heathrow Airport, but who goes to gigs at night in his local area in London. When the lead singer of the band “Smile” quits, which both Brian May and Roger Taylor are in, Freddie gets the chance to replace him, and replace him he does. From the first moment Freddie takes to the stage as their new lead singer, he has his audience in the palm of his hand and gives a show-stopping performance of “Keep Yourself Alive”, one of Queen’s earliest songs from their Queen 1 album.

The rest of the film charts Queen’s rise to fame, the disagreements, arguments and squabbles between the four members (“How many more Galileo’s do you want?” shouts Roger Taylor as he is about to throw a coffee machine at the others), Freddie’s relationship with his long-term girlfriend and fiancée Mary Austin and his internal torture over his sexuality. There are some lines in the film that are laugh out loud funny, Freddie for example says to Ray Foster from EMI records, “I pity your wife if you think 6 minutes is forever” when they are talking about how Bohemian Rhapsody won’t get played on the radio because it is “too long”. There is also a reference to the iconic scene in “Wayne’s World” where Wayne, Garth and the crew are headbanging to “Bohemian Rhapsody”:

Ironically Mike Myers who created and played Wayne is the actor who plays Ray Roster in the film, and when presented with “Bohemian Rhapsody” as a potential single from Queen’s new album “A Night At The Opera” he says: “No-one is going to be head-banging in the car to Bohemian Rhapsody.” A definite reference to the iconic “Wayne’s World” scene if ever there was!

When presented with “Bohemian Rhapsody” Ray Foster from EMI Records, played by Mike Myers, really doesn’t know what to make of the track. “Scaramouch? Fandango? Bis-what?” he asks the band.

“Bismillah….bulls**t!” he shouts. “Mark these words, no-one will play Queen.”

How wrong he was. We then see Freddie on Capital Radio with Kenny Everett, and Kenny plays the single live on his show. We also get a glimpse into the close friendship that Freddie and Kenny had together as they flirt with each other and raise their glasses to “Bohemian Rhapsody”. From then onwards “Bohemian Rhapsody” is a huge hit.

Not only do we see Queen’s rise to fame in the film, we also get to see the sadness, loneliness and desperation that Freddie goes through as he struggles to come to terms with his sexuality. We see the end of his relationship with Mary Austin, although they do remain life-long friends, and we see the debauchery, the drinks, the drugs and the parties that were the stuff of legends with all manner of weird and wonderful things in them. Dwarves, fire eaters, S&M were all a big part of these parties, but when everyone had left all you see is Freddie, alone, sad and desperate for someone to love him. Brian, Roger and John all have wives and families to go home to, but the film depicts Freddie as having no-one as he sits alone in his large house in Kensington London when all of the partgoers and revellers have gone.

Freddie was very much under the influence of Paul Prenter, his personal manager, and Paul was beginning to succeed in alienating Freddie from everything and everyone, including the rest of Queen. He convinced Freddie to take the offer of a two-album solo deal with Columbia Records, and Freddie goes to Munich with Paul to write the material for the albums. Eventually, thanks to Mary Austin, Freddie fires Paul and asks the rest of Queen to forgive him. This leads them to getting back together and to that legendary performance at Live Aid.

It’s 12 Noon in London, 7am in Philadelphia, and Around the World it’s Time for Live Aid

I cannot get over just how well the Live Aid sequence in “Bohemian Rhapsody” has been done. I can hardly see a difference between the original Live Aid footage of Queen and the scene in the film. Every detail is spot on, right down to all the Pepsi-Cola cups on Freddie’s piano.

Apparently the footage for this sequence was shot in a field in Hampshire where the Live Aid stage from Wembley Stadium was recreated in front of over 70,000 extras comprising the crowd. By now Rami Malek has got Freddie down so perfectly you can almost believe that it IS Freddie in this sequence. I’m in awe of him and how he got Freddie’s moves absolutely bang on, the way he teased one of the cameramen and the way he moved across the stage exactly like the Freddie on the Live Aid stage. Based on that 12 minute segement alone Rami Malek should get an Oscar next year.

Although the film follows the timeline of Queen’s rise to fame pretty much spot on, some creative liberties have been taken for the film. There are a couple of inconsistencies that as an eagle eyed Queen fan I picked up on straight away:

However, I will let those go as overall, I enjoyed the film very, very much.

The Show Must Go On – And It Does

I realise that I am a bit biased by saying this, but “Bohemian Rhapsody” has firmly cemented itself as one of my favourite films of all time. The chance to see Freddie and Queen brought to life, and brought to life so spectacularly well, has been amazing. The show must go on, and go on it does. At the time of writing this review I have seen “Bohemian Rhapsody” at the cinema twice, and I am sure I will see it another couple of times. Sure, quite a few creative liberties have been taken in this film, the script is a bit naff in places and there are a few inconsistences, but for the chance to see Freddie on the big screen where he belongs I can forgive all that.

I for one am also very glad that the film chooses to focus more on the band and their rise to fame, rather than solely on Freddie and his lifestyle. Freddie was an enigma and by doing this some of the mystery about him is still there, and some of the more outrageous things about his life and lifestyle have still been kept hidden. I think this was the right thing to do, as Freddie isn’t here any more to speak up for himself, or give his side of the story. I loved the focus on the band, seeing how they got together and their rise to fame which firmly placed them as the most successful and iconic band in history. For me, it was just the right mix of focus on how the band came to be, how they created “Bohemian Rhapsody” and the backlash against the song and Freddie’s life and flamboyancy.

Some have said that the film shouldn’t have stopped at Live Aid, that it should have shown Freddie in his later years before he died, but I think it was right that they didn’t do this. It is a chance to remember Freddie how he was before he was so ill and frail from AIDS, and before he was on the Brit Awards in 1990 as a shadow of his former self. The film could have gone on and ended with Queen’s “Magic” tour in 1986, but to end on the high note of their historic Live Aid performance still worked really well.

There is one final thing that I want to say. Rami Malek as Freddie Mercury will rock you – and then some. He is the champion of the world in “Bohemian Rhapsody”, and I am looking forward to seeing him hold an Oscar next year for his performance.

My Favourite Lines from “Bohemian Rhapsody”

“Roger, there’s only room in this band for one hysterical queen” – Freddie Mercury.

“I pity your wife if you think that 6 minutes is forever” – Freddie Mercury to Ray Foster at EMI Records.

“How many more Galileo’s do you want??” – Roger Taylor.

John Reid: “So, tell me. What makes Queen any different from all the other wannabe rockstars I meet?” Freddie Mercury: “I’ll tell you what it is, Mr. Reid. We’re four misfits who don’t belong together, playing for other misfits. They’re the outcasts right at the back of the room. We’re pretty sure they feel that they don’t belong either. But we belong to them.” 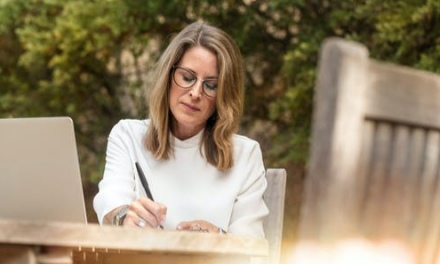 Helping Someone In Your Family Improve Their Health

Review: Prestige Hampers: Luxury Gifts and Hampers for Every Occasion 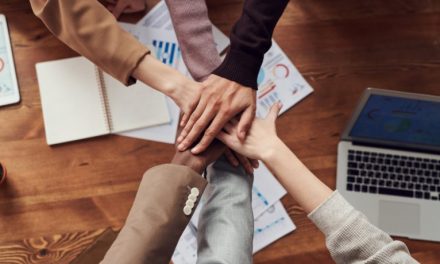 Creating A New Business Office? Here’s What You Need